Featured Item for March—The Journal of an Artist, by David Palladini

This week’s Featured Item is a lovely memoir, The Journal of An Artist by David Palladini, the creator of the Aquarian Tarot and the New Palladini Tarot.

The Journal of an Artist is a bracingly honest look at a man who chose to honor his authentic path by devoting his life to art. Must one suffer to create art? Is an artist’s life only unacknowledged work and unrecognized sacrifice? David’s writings, and more importantly – his life and art – say no. Great beauty can come from joy just as easily, if not more so, than from pain and suffering. 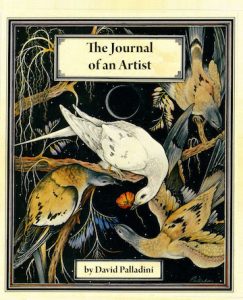 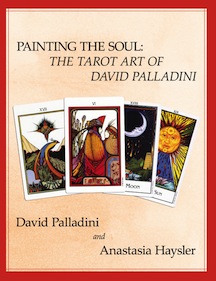 Gift Suggestion of the Day-The Art and Magic of Palmistry by Kooch Daniels. M.A provides a practical foundation of hand reading skills.

Conventional palmistry is a combination of two techniques: chirognomy, the study of the form and outer appearance of a hand; and chiromancy, the analysis of the lines and marks in the palm. This playbook provides a practical foundation of hand reading skills in relation to these two separate studies. Within its pages you’ll find essential guidelines for examining various shapes, sizes and markings in the palm. As you put this information into practice, you will be on a path proven to increase hand analysis skills.

Daily Gift Idea-The Journal of an Artist by David Palladini explores the life of David and his art.

The Journal of an Artist is a bracingly honest look at a man who chose to honor his authentic path by devoting his life to art.  Must one suffer to create art? Is an artist’s life only unacknowledged work and unrecognized sacrifice?  David’s writings, and more importantly – his life and art – say no.  Great beauty can come from joy just as easily, if not more so, than from pain and suffering.

Gift Suggestion of the Day – Tarot for Manifestation

Daily Gift Idea-Tarot for Manifestation is a book of practical Tarot – how to work with the Tarot to achieve your goals and realize your dreams.

James’ real world, real life work with his clients to examine their goals, dreams, and desires is the strong foundation of this book. The experience and insights of actual people makes James’ theories
immediate, real, and workable for anyone. This book shares these exercises with the reader.

We are excited to announce that Rachel Pollack’s “Soul Forest: Twenty-Four Tarot Writings” has been selected as the Second Runner up  for Best Divination Book for 2011 by the Coalition of Visionary Resources! We’re honored that our work with Rachel has been recognized, and thrilled that the work is being so well-received!

You can find out for yourself what the excitement is about by going to this page of our site for information about the book! 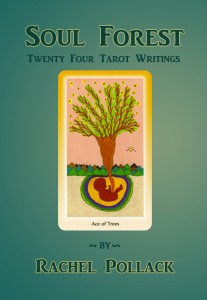 Debuting February 19, 2012, at PantheaCon in San Jose, the new novel from Kooch Daniels!  The book is also available for order from our web store! 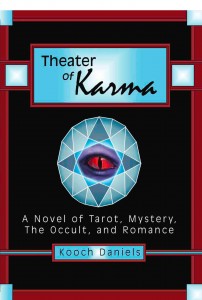 “What kind of stone is that?” asked Mark. “Is that an amethyst? the color is amazing.” He reached toward Carmella’s things and picked up her treasure.

For unknown reasons, a current of fear shot through her body. At the same moment, the electricity completely went out and the room became dark. “Give me my stone,” she repeated in a panic.

With Theater of Karma, Kooch Daniels takes the Tarot out of the realm of the academic and into the unpredictable world of potential reality. Each chapter depicts events that a card reader might conceivably hear when giving readings to the public. Each major arcana card’s keywords and thematic are the underlying foundation for each chapter.

Each character – many of them portraits from the author’s own experiences – could easily turn up in your next reading. But just as each of the Major Arcana comes together to illuminate a spiritual journey, so too does each chapter of Theater of Karma combine to tell a tale of romance, tragedy, suspense and ultimately hope.

After graduating from college in Ohio with a teaching credential and then saying “no” to teaching high school English, Kooch followed westward winds to San Francisco. There she pursued her love affair with metaphysics and became a student of the tarot. Early in her career as a reader she did beer foam readings for fun at her favorite night time hot spots, and in the daytime she sat in front of Ghirardelli Square to offer her tarot insights for one dollar a reading.

Kooch claims that her life is stranger than fiction. She returned to school and completed a Master’s degree in psychology, but then found her inner voice pulling her into being a professional reader. This included doing readings for twenty-five years at the northern and southern California Renaissance Faires.  Hoping to change the perception of the tarot from being a tool for fortune telling into being a guide for life-choices and inner transformation, in recent decades she has done readings in the corporate world for many high profile Fortune 500 companies, uptown private parties, and modest down home suburban gatherings.

Besides spending time with her family, Kooch enjoys hiking in the redwood forest and playing on the beach. But when Kooch is near her desk at home, she loves to write. Besides writing Theater of Karma, she has written The Art and Magic of Palmistry, and with her husband Victor, she has coauthored Tarot D’ Amour (Redwheel Weiser 2003.) and Matrix Meditations (Inner Traditions 2009).  On the tech side, she has written The Timely Tarot (ASC 1987), a computerized tarot program that divines personal readings, published by Astro Communication Services.

This booklet offers guidance for the Hierophant year, partnering with the archetypal energies as symbolized by the Tarot cards, thereby aligning ourselves with Life’s rhythms and with the wisdom of the Emperor aspect of our own souls.

Each month’s pages also provide things to look for, suggested activities for alignment, and questions for reflection, from the specific lens of that month’s card. It’s as though the Hierophant puts on a different costume each month or that his actions take on different adverbs as the months unfold.

This month-by-month guide will help you to discover and embody Hierophant concepts in 2012.

The Journal of an Artist is a bracingly honest look at a man who chose to honor his authentic path by devoting his life to art. Must one suffer to create art? Is an artist’s life only unacknowledged work and unrecognized sacrifice? David’s writings, and more importantly – his life and art – say no. Great beauty can come from joy just as easily, if not more so, than from pain and suffering.

Born in Italy and emigrated to America as a child, David Palladini’s dual cultural background is expressed in the lush creativity of his work. After studying art, photography, and film at New York’s Pratt Institute, David’s first professional assignment was as a photographer for the 1968 Olympic Games in Mexico City.

David is know for the intense colors and dramatic delicacy of his work. Having drawn a variety of works, from movie posters to magazine covers, David is also know for his creation of The Aquarian Tarot and The New Palladini Tarot, both published by U.S. Games Systems, Inc.

David has worked and lived in The Hamptons (New York State), Jamaica, and France. He currently lives in Newport Beach, California and continues to paint, write, and exhibit his work.

You can order it by clicking here.